Located about 30 minutes west of downtown Abu Dhabi, the man-made Yas Island hosts the Abu Dhabi GP at the Yas Marina circuit. As part of their contract with Formula One, Abu Dhabi now hosts the season finale which has seen some epic title showdowns in recent years, seeing Sebastian Vettel, Nico Rosberg and Max Verstappen all clinch their first ever World Championships in 2010, 2016 and 2021. Another unique aspect of the Abu Dhabi GP is the time of the event. Starting at dusk, you will enjoy the spectacular sunset as the race descends into darkness and the floodlights take over. Next door to the circuit is the Ferrari World theme park which has an array of activities and holds the world’s fastest roller-coaster, emulating the acceleration of an F1 car.

All grandstands at the Yas Marina circuit in Abu Dhabi are covered and have a giant screen viewable from your seats.

While each of our Abu Dhabi Grand Prix Packages comes with a pre-defined grandstand ticket, we’ve created this Abu Dhabi F1 Track guide to help you choose an alternative. Remodeled for the 2021 season, the chicane was removed just before the turn 5 hairpin, allowing the cars to run at a higher speed into a wider hairpin. This corner witnessed the world championship-deciding overtake on the final lap of the season and is a popular position for cars to overtake. If you are sitting in the North Grandstand just next to the hairpin, your views will include the hairpin as well as the start of the first DRS zone, allowing the cars to get close to the car in front.

The North Grandstand has a large choice of food and drink, and from these seats you will enjoy an unforgettable view of the circuit at sunset as well as the colourful Yas Hotel.

You can also find a video of of Friday Practice from the North Grandstand here.

View from the North Grandstand Premium seats on Friday Practice.

The “last” Grandstand of the Abu Dhabi track is the South Grandstand and will give you a prime view of any overtakes at turn 9. Just down the straight from the Marina Grandstand, you will also have photo-friendly stunning views of the Yas Marina, Yas Hotel and many yachts sitting on the water – giving you a real ‘Monaco vibe’.

Following turn 9, you will also see cars navigate the tight section of corners that follow as they get back up to full speed for the all-important final sector of the track.

Sitting at the end of the first DRS zone is the West Grandstand, which wraps around Turns 6 and 7. This grandstand will give you a front-on view of the cars flying down the long straight in the first sector. Here you will see F1 cars braking hard for turn 6 with the chance of overtakes, especially in the early laps and at safety car restarst. Turns 6 and 7 are a tight chicane and with a panoramic view of the circuit, photo opportunities in the West Grandstand are a must.

Due to the height of the grandstands at Abu Dhabi, you will also enjoy a view of pit entry from your seats, and from some positions you will also have the views of the final two corners and the back end of the starting grid.

Aptly named, the Marina Grandstand gives you outstanding views of the man-made marina next to the circuit as you sit on the fast straight in the second DRS zone. Unforgettably in 2021, this grandstand would have been the perfect spot to see Max Verstappen defend one final time from Lewis Hamilton on the final lap of the season. From your seats, you will also have a distant view of Turn 9 – one of the most popular overtaking spots on the track.

The Marina Grandstand has a combination of viewing opportunities – Formula One cars at full speed on the second DRS zone, overtaking at turn 9, and the tight infield section of Turns 10, 11 and 12.

Sitting on the main straight has many benefits at a Formula One race and the main grandstand at Abu Dhabi is no exception. Like all other grandstands at the Yas Marina circuit, the main grandstand is well-raised so expect great views whether high or low in this grandstand. Enjoy the race build up, starting grid and pit stops from your seats – with one very special bonus unique to Abu Dhabi.

As the season finale, you likely have the enjoy the opportunity to see either the World Champion or retiring stars do one final donut in front of their adoring fans on the start/finish straight. Amenities are always close by in the large grandstands at Abu Dhabi and you will be grateful for ease of access for a cool refreshment in the warm weather.

You can also find a video of of the start of the race from the Main Grandstand Yas Suite here.

View from the Yas Suite Main Grandstand before the start of the race. 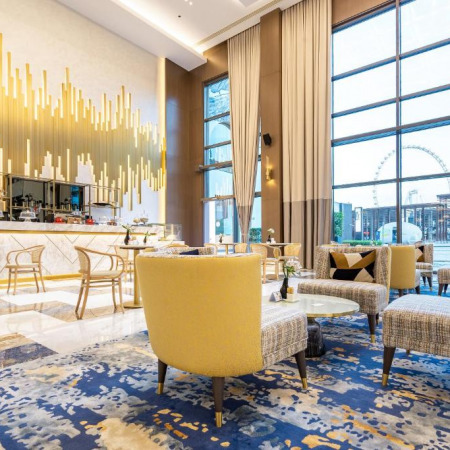 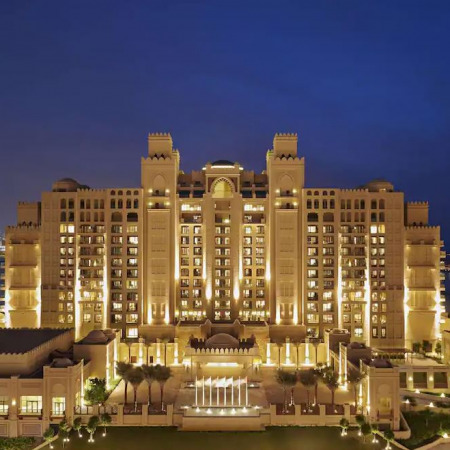