Located in Sao Paolo, the Interlagos circuit has been a mainstay on the F1 calendar since returning in 1990. Over the years, Brazilian heroes – none more so than the late great Ayrton Senna; but also Rubens Barrichello and Felipe Massa – have ensured the atmosphere among the crowd to be the most passionate outside of Ferrari’s Tifosi and Max Verstappen’s travelling support. Despite no Brazilians being on the grid in recent years, this has not deterred the support that the Brazilian GP gets year in, year out. Now the third-last race of the season, Interlagos as the final race has been the scene of many epic title showdowns over the years – Kimi Raikkonen in 2007, Lewis Hamilton in 2008 and Sebastian Vettel in 2012 just to name three in recent times. The 2023 race will also feature the sprint race format, ensuring you will enjoy an extra race on Saturday before the main event.

While each of our Brazilian Grand Prix Packages comes with a pre-defined grandstand ticket, we’ve created this Brazilian F1 Track guide to help you choose an alternative. Sat on the outside of Turn 1, M Grandstand will give you the best views of one of F1’s most famous first corners. The overtaking spot on Interlagos, you will see plenty of battles for position into the downhill corner, often late dives paying off by a driver braver on their brakes. The atmosphere is electric and the sprint race format ensures you will be able to see not one, but two race starts into this iconic first corner. Toilets are located within your grandstand, ensuring a convenient walk downstairs to use these amenities, while there are a lot of good food and drink options at the rear of the stand. You will also catch glimpses of Turns 2 and 3 from your seats within this stand.

Located at the iconic “Senna S” Turns 1 and 2, the D & H Grandstands will give you epic views of all the action into the first two corners. Both Grandstands are covered and you will have giant screens visible, ensuring you don’t miss a minute of the action. As with all stands along the main straight and opening corners, the atmosphere all weekend long is unrivalled.

Sat on the outside of Turn 3, the R Grandstand is a covered stand that is raised, ensuring epic views unobstructed by catch fencing. You will feel closer to the track at R Grandstand than other stands at the track thanks to the smaller amount of run-off at Turn 3. It was this corner that was the scene of a car park of F1 cars in 2003, with multiple cars including Michael Schumacher spinning off in the wet conditions. A flat-out left-hand corner, close racing is all but guaranteed, particularly being at the end of Turns 1 and 2 – the most popular overtaking position on the track. Directly in front of your seats is also pit exit, a tricky exit for the drivers coming directly onto the second straight. There is no giant screen visible from R Grandstand.

Next to the R Grandstand and a large stand along the back straight, G & S Grandstands have bleacher-style seats and is uncovered with a giant screen visible from your seats. These are very good grandstand choices for a lower budget option and allows you to see an F1 car at full speed down this fast straight. Another overtaking point, your views of Turn 4 should see some good wheel-to-wheel racing, with plenty of run off on corner exit – the scene of the infamous Verstappen and Hamilton battle in 2021. Here you will also be able to see the cars on the infield of the track, including the famous Senna S corners. There are also a few food and drink options directly behind this stand.

Directly on the exit of Turn 4, V Grandstand will give you the unique views of cars coming toward you head-on. While set a bit further back from the track than other stands due to the large run-off at Turn 4, you will have plenty of great photo opportunities of F1 cars dicing for position and then heading up-hill into the infield section of the circuit.

The largest stand on the circuit, the A Grandstand represents excellent value for views. Due to the bowl type nature of the Interlagos circuit, the A Grandstand being raised means you will be able to catch views of the cars at some points of the infield section of track. It is along the main straight that provides the best atmosphere – expect singing, dancing and a party vibe all weekend long from your seats. Your main views will be of the start/finish straight, as the cars fly past at full speed up-hill. The main straight at Interlagos has been the scene of many incidents over the years. A Grandstand is uncovered and is bleacher-style seating. Food and drink options are fairly limited close-by however there are still some stalls behind the stand, and vendors do walk up and down the grandstand, meaning you can also purchase food and some beverages from your seats.

Just further down the main straight from A Grandstand, B Grandstand sits in front of the pit-lane, including pit entry and some garages, dependent on your seats. To your left you will be able to view the final corner, as well as the run down into turn 1 and some infield corners, similar to A Grandstand. While the B Grandstand is raised higher, the catch fencing is quite high however you will still be able to appreciate F1 cars at full speed despite not being the perfect seats for unobstructed photo opportunities. B Grandstand is covered – which will come in handy when Brazil’s fickle November weather hits! There is also a giant screen visible from your seats, which unlike A Grandstand, are bucket-style seats with backs. 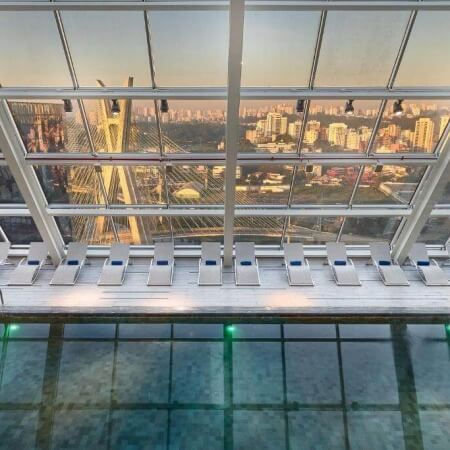