Named after one of the most exciting F1 racers in history – the late Gilles Villeneuve – Canada’s Formula One circuit has provided many memorable moments over the years. Whether it be the Wall of Champions taking many victims to Lewis Hamilton, Robert Kubica and Daniel Ricciardo’s debut victories or Jenson Button’s memorable victory in the rain-hit 2011 race, there is never a surprise result far away. Located in Montreal, the Circuit de Gilles Villeneuve sits on its own island, a short train ride from the city centre.

While each of our Canadian Grand Prix Packages comes with a pre-defined grandstand ticket, we’ve created this Canadian F1 Track guide to help you choose an alternative. Directly opposite the Main Grandstand is Grandstand 16. It is Grandstand 16 that will provide you with the best views of the famous Wall of Champions, the exit of the last chicane that has caught out so many of the best drivers in the world over the years. Grandstand 16 also gives you the best view of the pit entry, as cars fly in at full speed into the pits from the back straight. There are giant screens all along the pit lane, meaning you won’t miss a minute of the action from your seats.

Next to Grandstand 16 right on the start/finish line is Grandstand 1. Sitting further along the main straight, it is here you will have a prime viewing position of the pre-race build up on the grid and the post-race podium celebrations. As spectators are typically allowed on the track at the completion of the race, if this is not your thing – rest assured you won’t miss a second of the champagne being sprayed by the top three finishers from your seats. There are giant screens all along the pit lane, meaning you won’t miss a minute of the action from your seats.

Turn 1 at Canada has been the scene of many incidents – not just on the first lap. As the cars fly down the main straight into the left/right combination of Turns 1 and 2, it is the pairing of Grandstands 11 and 12 that provide the perfect views of this. Sat on the outside of the corner with the picturesque water and Montreal skyline behind you, Grandstand 12 will also give you views of the cars exiting the pits at full speed – sometimes sharing the same piece of track with another driver starting their lap!

Next to Grandstand 12 is the dual-grandstand 11. You will share similar views to Grandstand 12 with the difference being that Grandstand 11 sits on the apex of turn 2 facing the start/finish straight, which gives a broader view of the run into the first two corners of the track. Grandstand 11 gives you a prime position to see the likely overtakes into turn 1, and both Grandstands 11 and 12 have large screens visible from your seats.

The Platine stand is in the same section of track as Grandstands 11 and 12 but with a few key differences. Platine is perched on the inside of the track, sitting alongside the main straight. Platine is a higher-budget option with a roof to protect you from the elements, with large and more comfortable seats than other grandstands at the track, which offer bleacher seating. To the left of Platine is a large screen, with plenty of food and drink options close by.

As the name suggests, the Family Grandstand is a great option for a family-friendly seating option. Here you will catch all the action at the tight left-hand corner of turn 6, where like so many other sections of this circuit has been the scene of action and incidents, particularly on the opening lap. The Family Grandstand gives you a front-on view of the cars as they hurtle toward the corner, often a spot for overtakes. Not only will you have a fantastic view of the track, look to your left and you will have a stunning view of the Montreal skyline and Ile Notre-Dame.

Overlooking turns 8 and 9 is Grandstand 31. Here you will see the cars coming down a short straight with a DRS zone, meaning overtaking opportunities are a chance here. F1 cars enter a hard braking zone with a large run-off area here, meaning you will see them take more risks into this fast section of track. You will have great photo opportunities here, as the F1 cars come through the back straight under the famous bridge. And if you’re fortunate enough – you may even catch some brave local wildlife running across the track!

Another excellent option in this exciting section of track is Grandstand 34. What makes 34 unique to its neighbours is the fact that this grandstand is on the inside of the track, whereas others are on the outside of the circuit. Sitting in Grandstand 34 you will feel right on top of the action, looking directly at the apex of the Epingle Hairpin – a top overtaking spot on the track.

The first of four grandstands in the hairpin section is Grandstand 21 – here you will catch the cars enter the heavy braking zone for the hairpin, the scene of Robert Kubica’s horrifying crash in 2007. One of – if not the – most popular overtaking points of the track, you are always guaranteed action and a festival-like atmosphere with so many surrounding grandstands. Multiple large screens also ensure you won’t miss a thing throughout the weekend.

Directly across from Grandstand 34 is Grandstand 15 where here you will have incredible views of F1 cars at their aerodynamic best. Flying down the short straight into the tight hairpin, Grandstand 15 is where you will truly be able to appreciate the cars and drivers in tune as they brake heavily into the hairpin. Amenities are close and with three other grandstands nearby, the atmosphere at this section of track is unrivalled.in

Named after the local hero of the same name – Lance Stroll Grandstand is the direct opposite to Grandstand 21. This stand is a fan favourite, with a party-like atmosphere all weekend long.  You will have an almost totally unobstructed view of the hairpin, one of the most popular spots on the track for pure racing. Looking slightly to your left you will also be able to see cars hit the throttle as early as possible as they enter the long back straight. Photo opportunities are endless, with the Montreal skyline and the 1967 Expo Biosphere – an iconic addition of the track.

Heading toward the last and fast section of the circuit sits Grandstand 46. This stand is located at the exit of the hairpin and a little down the straight from the Lance Stroll Grandstand. While not as on top of the action as the other grandstands at the hairpin, Grandstand 46 still gives you excellent views of both the entry and exit of the hairpin. Here you will also see the cars at full power as they fly down the straight into the long DRS zone before the final chicane. Right in front of Grandstand 46 is the famous 1967 Expo Biosphere, which is a must see.

Similar to Grandstand 34, Grandstand 47 is one of two smaller grandstands sat on the inside of the hairpin section. While you will have your back to the entry to the hairpin, you will enjoy views of the cars to your left as they exit the hairpin and accelerate up the long back straight. Like all other grandstands in this section, the atmosphere is outstanding all weekend long. 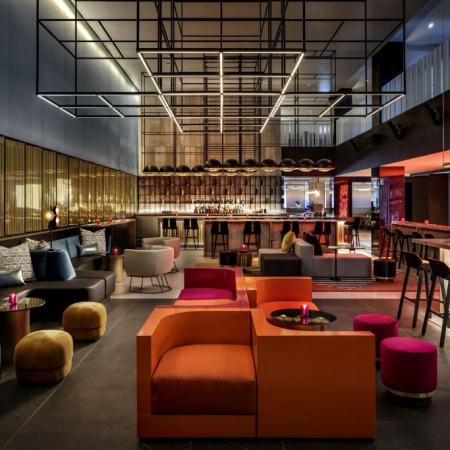 GET IN TOUCH TO SECURE YOUR CANADIAN F1 TICKETS TODAY.